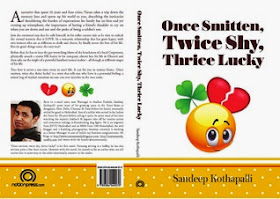 Quoted from the blurb:
“A narrative that spans 16 years and four cities, Varun takes a trip down the memory lane and opens up his world to you, describing the intricacies of shouldering the burden of expectations his family has on him and yet coming up triumphant, the importance of having a friend’s shoulder to cry on when you are down and out and the perks of being a soldier’s son.

Join the emotional sissy that he calls himself; in his roller coaster ride as he tries to unlock the eternal mystery that is LOVE. In a romantic relationship that has gone kaput, with two women who are as different as chalk and cheese, he finally meets the love of his life.

But do good things come the easy way?

Before that, he has to bear the gut wrenching blows of the henchmen of a local Corporator, physically assault a senior HR leader in his company, almost lose his life in Dharavi and then take on the might of a powerful landlord turned realtor – all though at different stages of his life.

True love is never a one-time event in one’s life. It can hit you in various forms. ‘Once smitten, twice shy, thrice lucky!’ is a story that tells you why Love is a perennial feeling, a mixed bag of myriad emotions no one can ever describe in the true sense.”

I received the book from the author in exchange for an unbiased review.
The title of the book and the blurb reveal quite a lot about the book. In that sense, it can be said that the story seem predictable. But, the way the story unfolds is where the charm of the book lies. You can safely assume that the author shares the story of his life where he falls in love 3 times and only the 3rd time he meets the real love of his life. The book is quite bulky – it has to be- for the narration span over 16 years. That is quite a time to be covered in a single book. Plus there are 3 love stories, albeit 2 unsuccessful.

The book is divided into three phases, each revolving around the 3 different phases in life. And love happens to him in all the three phases. There are a number of characters at play. I read the book quite slowly, so I found each one of them nicely sketched and depicted. It was as if, I could imagine everything in my mind. At times, it was monotonous – there were unimportant things explained in detail. Otherwise, there is a lot happening in the book, which keeps the readers engaged. Lahiri and Sasha were the two characters that stayed with me, even when I was done with the book. There was something inspiring about these two characters that made them special to me.

In the end, I realized that it is not just a love story; there are so many underlying themes which gel well that make the story entertaining and interesting to read. While you read this book, you are likely to take a few trips down the memory lane as there are quite a few things that most of us can relate to.

Thank you for stopping by. Cheers!
Jyoti Babel at 23:03 No comments:
Share 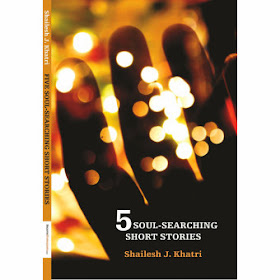 Quoted from the blurb -

“Five stories with five critical messages on life… Five situations with the protagonist making a decision that changes his life... Five circumstances that show you that life is never fair and yet… one needs to make the critical decision.
Amar, a promising stock analyst, gets the job of his dreams. However, circumstances lead to his failure. What does Amar do?
Uma is looking for the purpose of his life. He wants to give up the luxuries of life to find the truth. Does he eventually succeed?
Ravi loses his job one fine day and befriends those who tell him that the rich should sacrifice for the poor. He believes them. Does he benefit?
Vikas is shocked and annoyed when his parents decide to take him to their native village instead of Switzerland. What does he learn?
Pratap, a gold medalist in law, gets the job of his dreams in a well-known law firm. He faces a trying case. How does he respond?”

I received the book from BecomeShakespeare.com in exchange for an unbiased review.

When I first heard about this title, I expected that this book will be packed with 5 stories told in an extra-ordinary way. The word ‘soul-searching’ in the title of the book is what got my attention. Now, Lets find out if the book live up to my expectations?

Consisting of a bare 115 pages, this book 5 Soul-Searching Short Stories by Shailesh Khatri falls in the type of book that you can finish reading in a short reading session. The plots of the story are such that you can relate to it – they are picked from the everyday happenings in an ordinary man’s life. However, the way the stories are written and narrated doesn’t make the desired impact. There is something lacking in the narration which makes the stories easily forgettable.

All the stories start well and have the capacity to keep the reader’s engaged, but somewhere in between the narration falters. The plots are good, but depth in characterization is lacking. Another minus point was that the stories were quite predictable. So, the reader had nothing to look forward to at the end of a story.

I understand the author has put in a lot of effort in his maiden book. I hope my review will help him in doing away with these drawbacks in his next work.

Thank you for stopping by! Cheers!